The History of al-Tabari Vol. 31 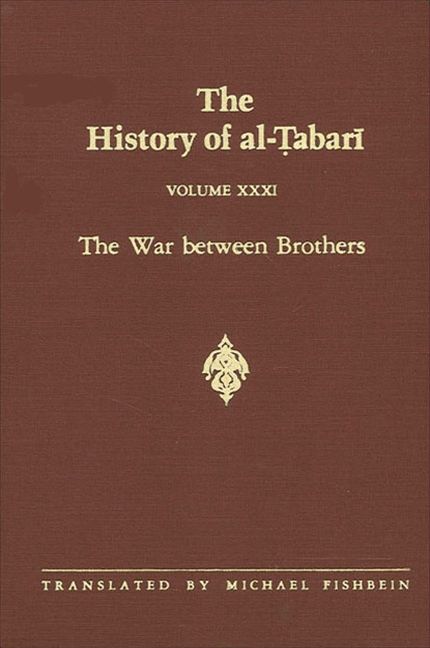 This section of the History of al-Tabari covers the caliphate of Muhammad al-Amin, who succeeded his father, Harun al-Rashid on March 24, 809, and was killed on September 25, 813.

The focus of this section is a single event, the civil war between al-Amin and his half-brother al-Ma'mun. Before his death, al-Rashid had arranged for the succession in a series of documents signed at Mecca and deposited for safekeeping in the Ka'bah. Al-Amin was to become caliph; al-Ma'mun was to govern Khurasan with virtual autonomy from Baghdad. Al-Amin could neither remove his brother from office nor interfere with his revenues or military support. Furthermore, al-Ma'mun was named as al-Amin's successor, and al-Amin was forbidden to alter the succession. If either brother violated these conditions, he was to forfeit his rights.

It soon became apparent that the good will to carry out these arrangements did not exist. Disagreement broke out when al-Amin insisted that many of the forces that had accompanied al-Rashid and al-Ma'mun to Khurasan return to Baghdad. When the majority of army commanders obeyed the new caliph's orders, al-Ma'mun was enraged and countered with measures to secure his position. Angry letters were exchanged, with al-Amin pressing his brother to make concessions that al-Ma'mun regarded as contrary to the succession agreement. By March 811, military conflict was imminent. Al-Amin demanded that certain border districts be returned to the control of Baghdad. When al-Ma'mun refused, al-Amin despatched an expedition to seize the districts.

Al-Amin's resort to force ended in disaster. Al-Ma'mun's forces, led by Tahir b. al-Husayn and Harthamah b. A'yan, quickly closed in on Baghdad. In a siege lasting over a year, Baghdad suffered extensive damage from the fighting and from bombardment by siege engines. Gangs of vagrants and paupers, organized by al-Amin into irregular units, fought a kind of urban guerrilla war. But, with Tahir and Harthamah enforcing the siege and with most of al-Amin's associates having switched their loyalties to the winning side, the caliph was forced to sue for terms. These were worked out among representatives of al-Amin, Tahir, and Harthamah. However, when the caliph boarded the boat that was to take him into Harthamah's custody, troops loyal to Tahir assaulted and capsized the boat. Al-Amin fell into the Tigris, was apprehended, and was executed that night on orders from Tahir. Thus ended this phase of the civil war. Al-Ma'mun was now caliph.

Al-Tabari's history of these years includes accounts by participants in the event, diplomatic letters between al-Amin and al-Ma'mun, Tahir's long letter to al-Ma'mun on the circumstances of al-Amin's death, and a dramatic eyewitness account of al-Amin's last hours. Also noteworthy is a 135-verse poem describing the devastation of Baghdad. The section ends with a series of literary anecdotes on the character of al-Amin.