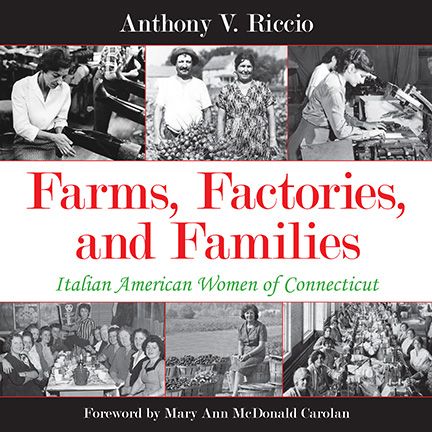 Often treated as background figures throughout their history, Italian women of the lower and working classes have always struggled and toiled alongside men, and this did not change following emigration to America. Through numerous oral history narratives, Farms, Factories, and Families documents the rich history of Italian American working women in Connecticut. As farming women, they could keep up with any man. As entrepreneurs, they started successful businesses. They joined men on production lines in Connecticut's factories and sweatshops, and through the strength of the neighborhood networks they created, they played a crucial role in union organizing. Empowered as foreladies, union officials, and shop stewards, they saved money for future generations of Italian American women to attend college and achieve dreams they themselves could never realize.

The book opens with the voices of elderly Italian American women, who reconstruct daily life in Italy's southern regions at the turn of the twentieth century. Raised to be caretakers and nurturers of families, these women lived by the culturally claustrophobic dictates of a patriarchal society that offered them few choices. The storytellers of Farms, Factories, and Families reveal the trajectories of immigrant women who arrived in Connecticut with more than dowries in their steam trunks: the ability to face adversity with quiet inner strength, the stamina to work tirelessly from dawn to dusk, the skill to manage the family economy, and adherence to moral principles rooted in the southern Italian code of behavior. Second- and third-generation Italian American women who attended college and achieved professional careers on the wings of their Italian-born mothers and grandmothers have not forgotten their legacy, and though Italian American immigrant women lived by a script they did not write, Farms, Factories, and Families gives them the opportunity to tell their own stories, in their own words.