The History of al-Tabari Vol. 17 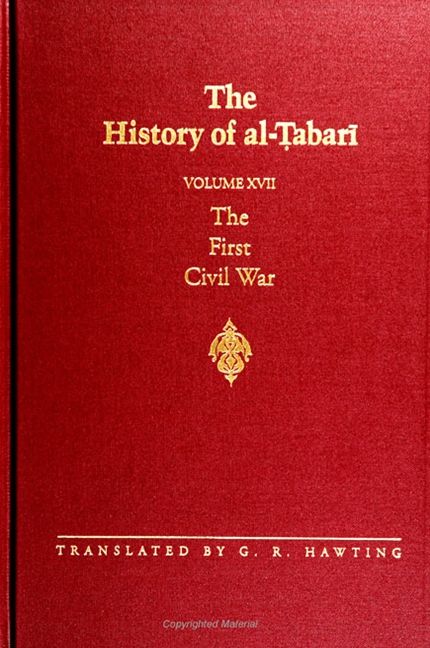 Many of the events treated in this volume have become part of the historical consciousness of Muslims. The first civil war of Islam, the Fitnah, is widely seen as of decisive importance in dividing the Muslims into three major traditions, Sunnis, Shi'is, and Kharijis, which have persisted until today. Although this division may be an over-simplification of a much more complex process of community formation, the events narrated here are certainly of great importance in the early history of Islam.

The volume is focused on the struggle between the caliph 'Ali and his rival and eventual successor as caliph, Mu'awiyah, the first caliph of the Umayyad dynasty. About half of the material is concerned with the confrontation between the two at the battle of Siffin in 657, the fighting, the ending of the battle when the Syrian supporters of Mu'awiyah are described as having attached Qu'ranic texts to their lances, and the subsequent negotiations between the two rivals which resulted in the dispute's being put to arbitration. Much detail is also provided about 'Ali's struggle against the Kharijis, his former supporters who had turned against him as a result of his agreement with Mu'awiyah to accept arbitration; the revolt against 'Ali in regions of Iraq and Persia around the northern edges of the Persian Gulf, which involved Christians, as well as Muslims, Arabs, and such non-Arab groups as Kurds; the events in Egypt that led to the burning of 'Ali's representative there in the skin of a donkey; and the murder of 'Ali by Ibn Muljam, the account of which sometimes reads as if it were a popular story.

Al-Tabari's text makes available a wealth of detail in narratives collected from the now lost compilations of scholars of earlier generations. The bulk of the material is cited from the famous Abu Mikhnaf, who died in A.D. 774, but there are also many reports from other traditionists and narrators whose materials would be largely unknown to us if it were not for the work of al-Tabari. The volume contains a number of speeches and letters attributed to the Prophet's son-in-law and cousin 'Ali, including his deathbed speech to his sons, and there is also a version of the document drawn up by 'Ali and Mu'awiyah in which they agreed to appoint arbitrators.

The Arabic text of the Leiden edition of al-Tabari has been compared with the more recent Cairo edition and with the substantial parallel passages in such other works as the Waq'at Siffin of al-Mingari and the Sharh Nahj al-Balaghah of Ibn Abi' l-Hadid, as well as other sources, in an attempt to provide a secure text for translation. Individuals and places are identified in the footnotes, further references to sources and secondary literature are provided, and textual problems and historical matters are discussed. The volume contains a bibliography and index.