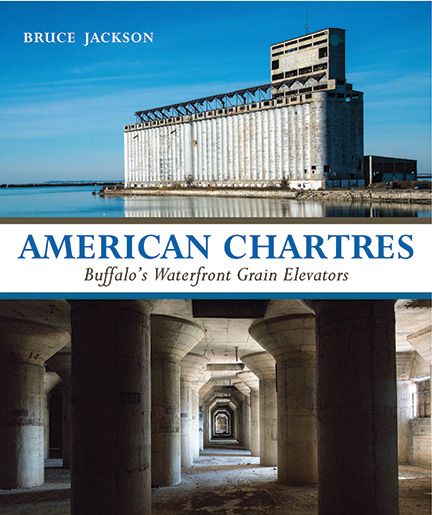 On a visit to Buffalo, New York, the French poet Dominique Fourcade was awed by the huge concrete grain elevators that line the city's river and lakefront. Turning to his guide, the poet Susan Howe, he exclaimed, "The American Chartres!" Taking Fourcade's exclamation as its title, Bruce Jackson's American Chartres documents Buffalo's surviving grain elevators, capturing these monumental buildings in all seasons and in various light; from the Buffalo River, the Ship Canal, and Lake Erie; from inside and from the top floors and roofs; in detail and in toto.

Invented in Buffalo by Robert Dunbar and Joseph Dart, the city's first grain elevator went operational in 1843. By the mid-1850s, Buffalo was the world's largest grain port, and would remain so well into the twentieth century. Grain elevators made Buffalo rich, and they were largely responsible for the development of the Port of New York.

While primarily functional objects, designed to move grain from one transportation modality to another, grain elevators are also beautiful structures, and they exerted a profound influence on many twentieth-century architects. Walter Gropius, one of the founders of the Bauhaus, collected photographs of American grain elevators and published two of Buffalo's elevators in 1913. The great Modernist architect Erich Mendelsohn came to Buffalo to photograph them in 1924, and they also influenced the practice of architects such as Le Corbusier and the Italian futurist Antonio Sant'Elia. More recently, the conceptual artists and photographers Bernd and Hilla Becher have included grain elevators in their documentation of industrial structures in Europe and North America.

Despite their deep impact on twentieth-century architecture, Buffalo's grain elevators remained underappreciated. As they outlived their economic usefulness, many were destroyed. Only recently have local residents realized what treasures they are. Beautifully illustrated with more than 160 color photographs, this book documents what remains.