The History of Here

A House, the Pine Hills Neighborhood, and the City of Albany 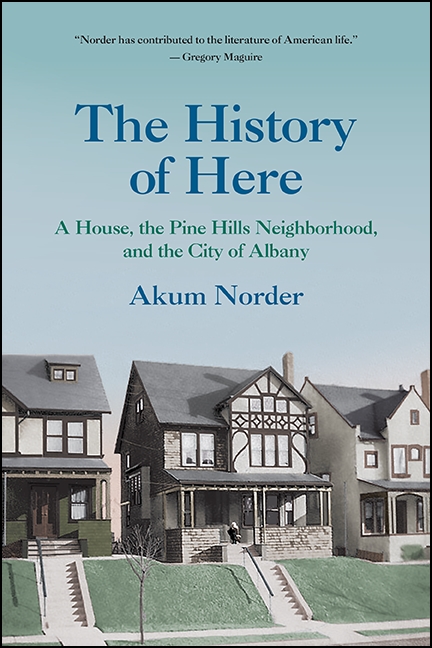 When you buy an old house, you get much more than a house. In all its quirks, its alterations, in fragments of memory and traces left behind, you get a bundle of small mysteries. Who used to live here? Why did they come here, and where did they go? Whose name is that written on the attic wall? When did that odd little bathroom get shoehorned in there, and what did the room look like before? If you're lucky, one or two of your house's mysteries might unfold into stories. Akum Norder was very lucky.

The History of Here follows Albany, New York's, Pine Hills neighborhood through more than one hundred years of change. At its heart is the story of Norder's 1912 house and the people who built and lived in it. As Norder traced their histories, she came to see the development of her house, her street, and her neighborhood as a piece of Albany's story. In the lives of its residents, their struggles and triumphs, she saw a reflection of twentieth-century America.

Drawing on interviews, city records, newspapers, out-of-print books, and other sources, Norder's narrative makes a case for city neighborhoods: their value, their preservation, and the grassroots involvement that turns a jumble of houses into a community. Funny and thought-provoking, readable and relevant, The History of Here celebrates the sense of place that fuels the new urbanism.