No Rule of Law, No Democracy

Conflicts of Interest, Corruption, and Elections as Democratic Deficits 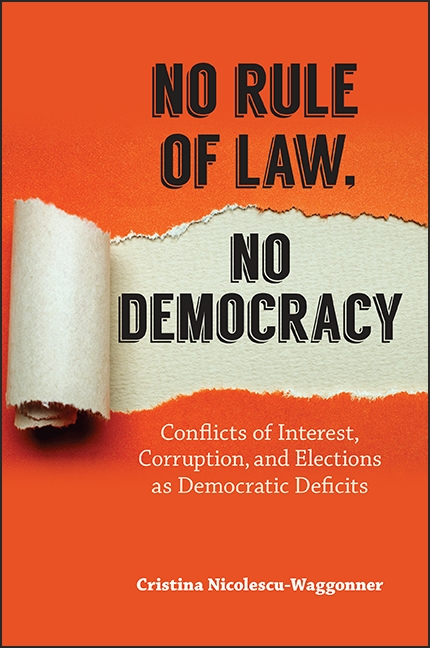 Mainstream theories assert that democracy cures corruption. In market economies, however, elections are expensive and parties, with ever-thinning memberships, cannot legally acquire the necessary campaign funds. In order to secure electoral funds, a large number of politicians misappropriate public funds. Due to the illicit character of these transactions, high officials with conflicts of interest prefer to leave anticorruption enforcement mechanisms unreformed and reserve the right to intervene in the judicial process, with dire consequences for the rule of law. In No Rule of Law, No Democracy, Cristina Nicolescu-Waggonner demonstrates that when corrupt politicians are in power—true of nearly all new democracies—they will protect their office and fail to implement rule of law reforms. Consequently, these polities never reach a point where democracy could and would cure corruption. This dysfunction is tested in one hundred cases over sixteen years with significant results. In the case of the Czech Republic, for example, which is regarded as a consolidated democracy, there is systematic corruption, misappropriation of state funds, an unreformed judiciary, and arbitrary application of law. The only solution is a powerful, independent, well-funded anticorruption agency. Romania, one of the most corrupt countries in Europe, established, at the European Union's request, powerful anticorruption bodies and punished corrupt leaders, which created the predictability of enforcement. It is the certainty of punishment that curtails corruption and establishes true rule of law.