Lessing and the Enlightenment

His Philosophy of Religion and Its Relation to Eighteenth-Century Thought 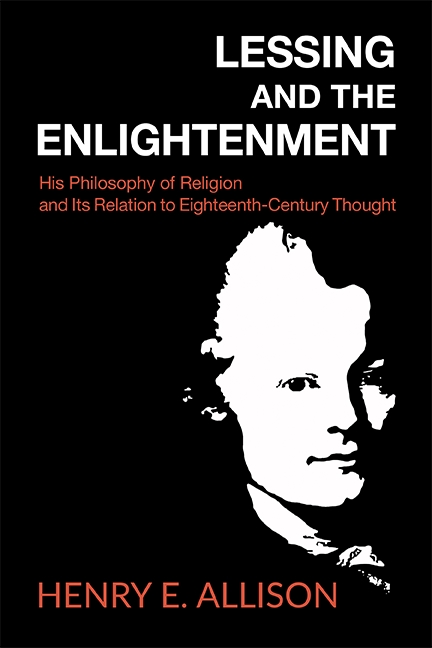 Although only one aspect of Gotthold Ephraim Lessing's diverse oeuvre, his religious thought had a significant influence on thinkers such as Kant, Hegel, Kierkegaard, and present-day liberal Protestant theologians. His thought is particularly difficult to assess, however, because it is found largely in a series of essays, reviews, critical studies, polemical writings, and commentary on theological texts. Beyond these, his correspondence, and a few fragmentary essays unpublished during his lifetime, we have his famous drama of religious toleration, Nathan the Wise, and his philosophical-historical sketch, The Education of the Human Race. In these scattered texts, Lessing challenged the full range of theological views in the Enlightenment, from Protestant orthodoxy, with its belief in Biblical inerrancy, to a radical naturalism, which rejected both the concept of a divine revelation and the historically based claims of Christianity to be one, as well as virtually everything in between. Since he refused to identify himself with any of these parties, Lessing was an enigmatic figure, and a central question from his time to today is where he stood on the issue of the truth of the Christian religion. Now back in print, and with the addition of two supplementary essays, Henry E. Allison's book argues that, despite appearances, Lessing was not merely an eclectic thinker or intellectual provocateur, but a serious philosopher of religion, who combined a basically Spinozistic conception of God with a sophisticated pluralistic conception of religious truth inspired by Leibniz.