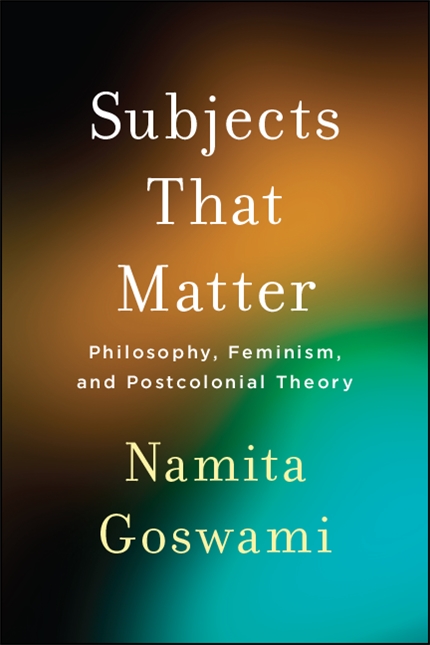 In this ambitious book, Namita Goswami draws on continental philosophy, postcolonial criticism, critical race theory, and African American and postcolonial feminisms to offer postcoloniality as a model for philosophical practice. Moving among and between texts, traditions, and frameworks, including the work of Gayatri Spivak, Theodor Adorno, Barbara Christian, Paul Gilroy, Neil Lazarus, and Hortense Spillers, among others, she charts a journey that takes us beyond Eurocentrism by understanding postcoloniality as the pursuit of heterogeneity, that is, of a non-antagonistic understanding of difference. Recognizing that philosophy, feminism, and postcolonial theory share a common concern with the concept of heterogeneity, Goswami shows how postcoloniality empowers us to engage more productively the relationships between these disciplines. Subjects That Matter confronts the ways Eurocentrism, an identity politics that considers difference as inherently oppositional, relegates minority traditions to a diagnostic and/or corrective standpoint to prevent their general implications from playing a critical and transformative role in how we understand subjectivity and agency. Through unexpected, often surprising, and thought-provoking analytic connections and continuities, this book's interdisciplinary approach reveals a postcolonial pluralism that expands philosophical resources, confounds and limits our habitual disciplinary lexicons, and opens up new areas of inquiry.