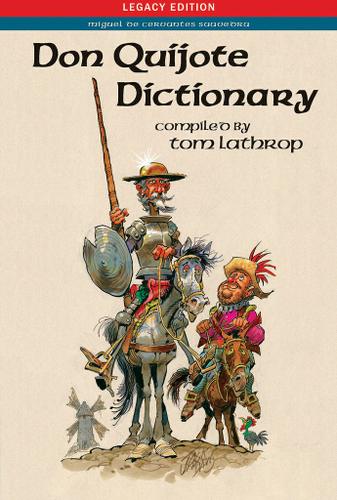 This Dictionary has 7800 entries and 12,000 definitions. It lists all words that students ordinarily shouldnt be expected to know (abadejo codfish; zaquizami garret), and some that maybe they should know but dont (padecer to suffer; raposa fox), and sometimes it gives definitions for more common words, just in case (manera way; nobleza nobility). The first mention is listed with a part and chapter number (i.e., [II16] = Part II, Chapter 16). Words from preliminary parts of the book are so identified as well (i.e., [prII] = Cervantes Prologue to Part II). Since it is not likely that youll be doing very much with these initial sections, words that are first introduced in the preliminary parts are also listed in the margins of the main body of the text the first time they appear there. Adjectives are listed in masculine singular, even though they may not show that from in the text. Verbs are generally listed in their infinitive form, although some present and past participles are also listed, and some stranger, older forms are listed as they appear (trujeron, veredes) and variant infinitives are also listed (escrebir, esgremir). Many times this dictionary lists cognates, sometimes identical cognates, that are not given in the margins (nausea nausea; noble noble), just in case students are curious if Cervantes used a certain word or not. Grammatical words (el, las, mi, muy) are mostly not listed, and neither are ordinary definitions of very common words (libro and decir, for example, are nowhere to be found). Sometimes when a common word has an uncommon meaning, only this definition is listed even though the word in its everyday meaning is seen many times (the only definition for malo for example, is devil).