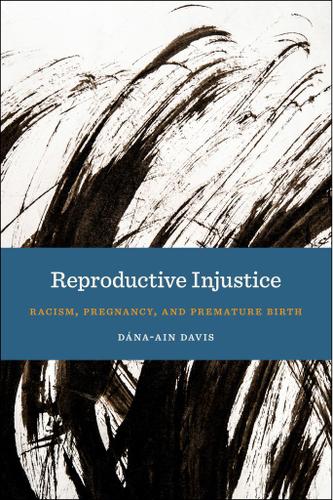 Winner, 2020 Senior Book Prize, given by the Association of Feminist Anthropology

Winner, 2020 Eileen Basker Memorial Prize, given by the Society for Medical Anthropology

Honorable Mention, 2020 Victor Turner Prize in Ethnographic Writing, given by the Society for Humanistic Anthropology

Finalist, 2020 PROSE Award in the Sociology, Anthropology and Criminology category, given by the Association of American Publishers

Black women have higher rates of premature birth than other women in America. This cannot be simply explained by economic factors, with poorer women lacking resources or access to care. Even professional, middle-class black women are at a much higher risk of premature birth than low-income white women in the United States. Dána-Ain Davis looks into this phenomenon, placing racial differences in birth outcomes into a historical context, revealing that ideas about reproduction and race today have been influenced by the legacy of ideas which developed during the era of slavery.

While poor and low-income black women are often the “mascots” of premature birth outcomes, this book focuses on professional black women, who are just as likely to give birth prematurely. Drawing on an impressive array of interviews with nearly fifty mothers, fathers, neonatologists, nurses, midwives, and reproductive justice advocates, Dána-Ain Davis argues that events leading up to an infant’s arrival in a neonatal intensive care unit (NICU), and the parents’ experiences while they are in the NICU, reveal subtle but pernicious forms of racism that confound the perceived class dynamics that are frequently understood to be a central factor of premature birth.

The book argues not only that medical racism persists and must be considered when examining adverse outcomes—as well as upsetting experiences for parents—but also that NICUs and life-saving technologies should not be the only strategies for improving the outcomes for black pregnant women and their babies. Davis makes the case for other avenues, such as community-based birthing projects, doulas, and midwives, that support women during pregnancy and labor are just as important and effective in avoiding premature births and mortality.