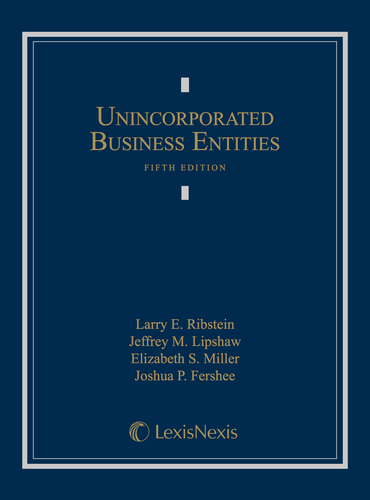 Unincorporated business associations are a distinct and increasingly important area of modern business law practice. Indeed, many lawyers are more likely to be working with unincorporated business entities than with corporations. This Fifth Edition of Unincorporated Business Entities has been re-organized on a comparative basis (rather than a form-centered basis) since that is how practitioners confront the topic from a business planning and transactional standpoint. One of the benefits of this approach is to remedy a long-standing problem in teaching about LLCs. The law surrounding this relatively new form of organization is still developing rapidly, particularly regarding the fiduciary duties of members and managers. The form-centered approach tended to mean that LLCs, despite now being the predominant form of business organization in the United States, were the last subject covered in the typical semester-long course, and therefore often got short shrift.
Despite the re-organization, the Fifth Edition carries on the goals of its predecessors: (1) to provide the basis for a course that teaches the kind of business law the overwhelming majority of lawyers are likely to practice; (2) to teach issues in current legal doctrine and not to be overly concerned with historical and arcane rules; and (3) to teach the law in a business planning context, demonstrating the interaction between default rules and the art of business lawyering. This edition still includes the Problems. Chapter 1 introduces five stories that carry on in realistic problems distributed throughout the overview of the basic forms and the subsequent in-depth comparative review of legal issues of management, financial rights, limited and vicarious liability, transfer of interests, fiduciary obligations, and endgames.
The text also includes a "Chameleon Agreement" in the Appendix which provides the basics of a partnership or operating agreement. (It is a chameleon because it refers to the parties as "Memners," i.e., either partners in a partnership or members in a limited liability company.) The Appendix also contains the partnership, limited partnership, and limited liability company statutes you will need for purposes of the book.