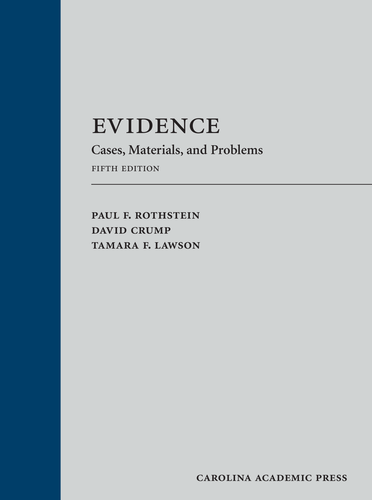 Evidence: Cases, Materials, and Problems by Rothstein, Crump, and Lawson is the best casebook available for understanding the Federal Rules, using them, and debating about them. It is right up to date, with plenty of cases from the twenty-teens. Organized principally according to the Federal Rules, with significant state variations occasionally noted, the books copious, very descriptive section and subsection headings will help the professor to assign those parts that are desired. There are problems throughout that challenge students both to apply newly learned concepts and to resolve issues at the cutting edge.

This casebook has excellent coverage of important subjects such as 403 balancing, character, impeachment, confrontation, experts, and digital evidence. The hearsay and hearsay exception chapters are outstandingthey benefit from an original conception by Professor Paul Rothstein, who was a consultant to Congress when the Rules were written. The authors have long classroom experience, they are widely published scholars, and they are all former trial lawyers, so this is a casebook both for the practice of handling evidence and for considering difficult policy issues.

Each section starts out with a directive to read a particular rule. Then, a brief background explanation of the area ordinarily follows. Some teachable cases begin the real coverage, followed by notes and questions that explore variations and implications. These cases are followed by more difficult ones, accompanied by problems testing whether students can apply or critique what they have learned and integrate it with other topics. Every note, question, or problem has a heading indicating what it is about, so that professors are able to identify the subjects they wish to cover and students can receive direction about the intended focus of each inquiry. The materials cover a wide range of perspectives, from intensely pragmatic concerns through deeply philosophical policy issues to new approaches to evidentiary analysis. The casebook also includes textual explanations, alternative rules, problem sets, jury instructions, articles, proposals, legislation, and excerpted testimony. The organization is designed to help carry out the teacher's own choices about the best approach to Evidence in an introductory course.